The Books of Maccabees were authored in Greek in the second century BCE by a Jewish writer we know as Jason of Cyrene. This excerpt is a narrative which describes the martyrdom of a pious Jew named Razis brought on by Syrian general Nicanor. In the moment of Razis’ gruesome death, he hurls his inner organs at the enemy and prays to “the master of life and spirit” (τὸν δεσπόζοντα τῆς ζωῆς καὶ τοῦ πνεύματος) to restore those body parts to him at a later time, thus expressing his firm trust in the physical resurrection of the dead.

“A certain Razis, one of the elders of Jerusalem, was denounced to Nicanor as a man who loved his compatriots and was very well thought of and for his goodwill was called the father of the Jews. In former times, when there was no mingling with the Gentiles, he had been accused of Judaism, and he had most zealously risked body and life for Judaism. Nicanor, wishing to exhibit the enmity that he had for the Jews, sent more than five hundred soldiers to arrest him; for he thought that by arresting him he would do them an injury.

When the troops were about to capture the tower and were forcing the door of the courtyard, they ordered that fire be brought and the doors burned. Being surrounded, Razis fell upon his own sword, preferring to die nobly rather than to fall into the hands of sinners and suffer outrages unworthy of his noble birth. But in the heat of the struggle, he did not hit exactly, and the crowd was now rushing in through the doors. He courageously ran up on the wall, and bravely threw himself down into the crowd. But as they quickly drew back, space opened and he fell in the middle of the empty space.

Still alive and aflame with anger, he rose, and though his blood gushed forth and his wounds were severe he ran through the crowd; and standing upon a steep rock, with his blood now completely drained from him, he tore out his entrails, took them in both hands and hurled them at the crowd, calling upon the Lord of life and spirit to give them back to him again. This was the manner of his death.” (2 Maccabees 14:37–46) 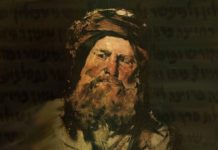 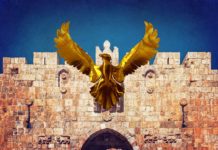