Home Jewish History Hanukkah and the Abomination of Desolation

As Yeshua and his followers were leaving Jerusalem, his disciples marveled at the beauty of the Temple. Jesus responded, “Truly I say to you, not one stone here will be left upon another, which will not be torn down.” (Matt 24:2 NASB). How could Yeshua know that the Temple would be destroyed?

In 167 BCE, the Seleucid ruler Antiochus IV began forcing the local population of Judea to abandon their ancestral ways and to worship pagan gods. The Seleucids defiled the Jerusalem Temple, robbed its treasures, and erected a statue of Zeus in the holy place (1 Macc 1:41-64). Many believe that the book of Daniel speaks of this horrific event when it states, “On the wing of abominations will come one who makes desolate” (וְעַל כְּנַף שִׁקּוּצִים מְשֹׁמֵם; Dan 9:27 NASB). In Hebrew, שִׁקּוּץ (shekutz) is something “impure”, “detestable” and “vile” that is often related to idols and the worship of foreign gods (cf. Deut 29:16; Isa 66:3; Zech 9:7; 1 Kgs 11:5; Nah 3:6). According to Daniel, this vile thing brings “destruction” and “desolation”; the Hebrew שָׁמֵם (shamem) carries an idea of “silence” and “quiet” because everything lies in ruin. Indeed, Jewish prayers in the holy place ceased when Antiochus desecrated it — no one sang or sounded the shofar in the Temple.

In those days, a priestly group of Jews known as Maccabees fled to the mountains, revolted against the Seleucids, and fought the invaders for seven years. In 160 BCE they recaptured the Temple, cleansed it from defilement, and resumed sacrifices to Israel’s God (1 Macc 4:52). Today, we remember those events by celebrating Hanukkah (חֲנוּכָּה) the holiday of “dedication.” We light special multi-branched lamps to remember the miracles of those days. Yet while the Maccabees cleansed the Temple, they did not rid Israel of foreign influence. As the Seleucid Empire declined, Rome ascended as the world’s next great power. The Maccabees made a strategic alliance with the Romans, but eventually they would come to exercise the same kind of power over Israel that the Seleucids had before them.

The buildings that impressed Jesus’ disciples so much were erected by Herod the Great, who began expanding the Jerusalem Temple complex in 20 BCE. He did no live to see its completion around 60 CE, and it would be destroyed by the Roman army just a decade later. Yeshua was right: the marvelous buildings would be toppled to the ground by Titus in 70 CE. Jesus warned his disciples, “when you see the abomination of desolation which was spoken of through Daniel the prophet, standing in the holy place… flee to the mountains” (Matt 24:15-16).

It seems that the words of Daniel were not just about the desolation of Antiochus in the Maccabean era. Yeshua foresaw the greater desolation of Titus in the Roman period. Sometimes history repeats itself! In every generation there are those who seek to ruin, and attempt to lay waste the holy things of God. But the spirit of holiness that once burned in the Maccabees continues to burn in the hearts of many Jews who light the Hanukkah lamps today. Whatever the future may hold, with or without the Temple, the people and Land of Israel remain, and God continues to work among his children. 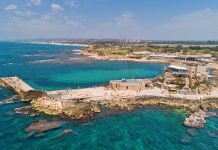 Herod and the Genius of Ancient Engineering