One text that remains an enigma to most Christ-followers is the post-resurrection story in the twentieth chapter of John’s gospel where Jesus cautions Mary to avoid touching him, but a week later invites Thomas to do just that.

Mary, seeing her beloved and presumed-dead rabbi now alive, attempted to hug the resurrected Jesus (vs. 16). He emphatically told her that she could not touch him because He had not yet ascended to his Father (vs. 17). Shortly after (when all the disciples were gathered to regroup) Christ appeared to them resurrected! Thomas was absent from this gathering (vss. 19-21). Later, when the disciples reported to Thomas that they had seen Jesus alive, he understandably responded with skepticism (vs. 24). Eight days later, Jesus unexpectedly appeared again to the gathered disciples and challenged Thomas to touch him by placing his hands into the holes that remained in his body (vs. 26-27). The obvious question is this: why did Jesus deny Mary, but later encourage Thomas to touch Him?

In order to understand Jesus’ very different instructions to Mary and Thomas, we need to understand the purity requirements for the Jewish High Priest on the Day of Atonement. The High Priest was forbidden to come into contact with anything that was ceremonially unclean in order to avoid being disqualified to enter God’s presence the following day. So much depended on this ritual purity!

After His resurrection, Jesus (as our ultimate High Priest) would shortly be ministering in the heavenly tabernacle (Heb. 9:11). It is significant that Jesus appeared to the disciples and told Thomas to touch him after eight days, because it takes seven days to ordain a priest (Ex. 29:35).

The most-likely reason for Jesus’ instructions to Mary had to do with the fact that He was determined to enter the heavenly tabernacle in a ready-to-serve, consecrated state. Defilement would not be a sin, but it would have disqualified Him (for a period of time) from entering God’s presence. Mary may have had a number of reasons for defilement (possible menstrual circle, stepping into the tomb, etc), Jesus’ priestly mission was too important to allow for any possibility of failure. By the time Jesus met Thomas, His priestly work is done. He had returned from completing His duties and possible defilement was no longer an issue.

Jesus’ role as prophet was carried out during His earthly life. His role as king was yet to be realized at the time of the ascension. He first needed to be ordained a priest and carry out His duties in the heavenly tabernacle! Nothing could be permitted to stand in the way of his mission. 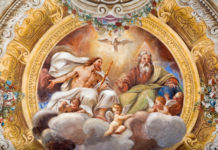 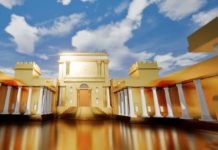