Many students of Biblical Hebrew realize that the texts we read are quite ancient, and that we have many traditions attached to them. When the Hebrew text of the Bible was first written, the words did not have any vowels. And this lack of vowels allows for various readings of certain words, along with a broader interpretation of what the texts might mean.

Ancient rabbis had an interesting method of reading biblical verses and deriving their meanings based on slight alterations of Hebrew letters. Here is short teaching by Reish Lakish (late second century CE) about the word “Amen”:

Reish Lakish said: One who answers Amen with all his strength, they open the gates of the Garden of Eden before him, as it is stated: “Open the gates, and a righteous nation shall come who keeps the faith” (Isaiah 26:2). Do not read: Who keeps [שׁמר; shomer] the faith [אמנים; emunim], but rather: Who say, ‘Amen!’ (שׁאמרים אמן; she’omrim amen). What is the allusion of the word Amen? Rabbi Ḥanina said: It is an acronym of the words: God, faithful King [El Melekh ne’eman]. (Babylonian Talmud, Shabbat 119b)

The verse on which the rabbi expounds is Isaiah 26:2: “Open the gates, that the righteous nation that remains faithful may enter” (פִּתְחוּ שְׁעָרִים וְיָבֹא גוֹי־צַדִּיק שֹׁמֵר אֱמֻנִים). In the Talmud, the rabbi’s teaching appears in a discussion about forgiving judgments against the sins of God’s people. Reish Lakish suggests the gates that Isaiah mentions may be “the gates of the Garden of Eden” (שַׁעֲרֵי גַן עֵדֶן; shaarei gan eden). And then the wordplay begins! In the original Hebrew of Isaiah, the phrase “Those who remain faithful” (or literally, “observe the faith” [שֹׁמֵר אֱמֻנִים; shomer emunim]) is what’s called a participial phrase. Reish Lakish suggests a different reading. He turns the phrase into “those who say amen” (שֶׁאוֹמְרִים אָמֵן; sheomrim Amen).

Reish Lakish does a beautiful dance with the Hebrew letters to explain why the simple word “Amen” is so powerful: it can open the gates of Eden! For the rabbi, the word “amen” does not simply mean “true,” but rather stands as an acronym for “God, Faithful King” (אֵל מֶלֶךְ נֶאֱמָן; El Melech Neeman – A-M-N). Thus, those who engage in prayer with God step into a powerful relationship with the Almighty that can offer a view into the Garden of Eden. 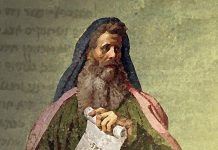 The Teachings of Jesus and Enoch