Home Jewish Gospels In what sense is “salvation from the Jews”?

“Our fathers worshiped on this mountain (Mt. Gerizim), but you “Jews” claim that the place where we must worship is in Jerusalem (Mt. Zion).”

“Believe me, woman, a time is coming when you will worship the Father neither on this mountain nor in Jerusalem…”.

But what concerns us the most in this article is His enigmatic phrase regarding salvation and the Jews:

“You Samaritans worship what you do not know; we (Jews) worship what we do know, for salvation is from the Jews.”

The big question that many modern Christ-followers ask (even those who are very happy to find this statement in John’s Gospel) is this:

Given the fact that traditional Judaism rejects the Messiahship of Jesus, how are we to understand that “salvation is from the Jews”?

The answer is three-fold, but if you ask me, not very complicated.

First, our contemporary (Rabbinic) Judaism is not identical to the Judaism(s) of the first century. Therefore, we must not make the mistake of thinking that today’s rejection of Jesus as Messiah by Rabbinic Judaism means that there was no ideological home for Jewish Jesus-followers in first-century Judaism.

Second, biblical salvation had nothing to do with our contemporary Western concept of salvation as personal insurance from the fires of hell. Rather, it had to do with God’s uncontested rule on earth in the same way as His rule was already manifested in heaven. The eternal reign of righteous King Jesus over both Israel and the Nations was the salvation that the prophets of Israel spoke of and which the nations earnestly desired.

Third, Jesus’ phrase, “salvation is from the Jews” is simply a summary reference to the prophetic words spoken by the patriarch Jacob before his death. In a passage found in both Judean and Samaritan Torahs, Jacob declared:

“… the scepter will not depart from Judah, nor the ruler’s staff from between his feet, until he to whom it belongs shall come and the obedience of the nations shall be his.” (Genesis 49:8-10).

The Jewish author of the Book of Revelation also linked Jacob’s blessing to Jesus, by clearly referring to Christ as, “the Lion from the tribe of Judah”.

So in the fourth gospel, which is otherwise very sympathetic to the Samaritan Israelites, Jesus clearly allied himself with Judean Israelites when he reminded the Samaritan woman that the role of a salvific leadership in the Torah was promised only to Judah and his family! None of Israel’s other children received the same honor.

When the Jewish Christ made His point, the Samaritan woman was satisfied with His answer. She speedily left to tell everyone in her hometown about her most unusual encounter with a most unusual Jew – one that they too would soon recognize as a long-awaited King and Savior of all Israel.

Is Jesus God’s “Only Begotten” Son? 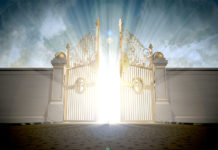