In the famous children’s story, Cinderella leaves behind a glass shoe and the prince searches for the identity of his love by making women try on that shoe. In Biblical Hebrew “shoe” is נַעַל (naal) – a common object, which can be very symbolic in the eastern culture. The Book of Ruth preserves a tradition how the transfer of rights was shown by symbolically removing a shoe.

In Chapter 4, Boaz wanted to marry Ruth but there was a complication. He was not the closest male relative.  He offered the option of redeeming Naomi’s late husband’s property to a relative of deceased Elimelech, but along with the land came an obligation to marry Ruth, the Moabitess. The closest relative refused his right to redeem the property and marry Ruth through levirate marriage (Lev 18:16) by a symbolic action involving a shoe.

“Now this was the custom in former times in Israel concerning the redemption and the exchange of land to confirm any matter: a man removed his sandal and gave it to another, and this was the manner of attestation in Israel. So the closest relative said to Boaz, “Buy it for yourself.” And he removed his sandal.” (Ruth 4:7-8 NASB).

This may appear odd to modern people, but in ancient Israel a sandal functioned almost like a signature on a contract. It also showed that the person relinquished his rights and recognized another’s rights (read more about near-eastern customs involving shoes here). If the identity of the party in the agreement was ever in question, one could presumably produce a shoe which would actually fit that person, just like in the Cinderella story.

Join me and discover the simplicity of the Hebrew culture and language. Understand how it speaks in through simple imagery, yet says so much. 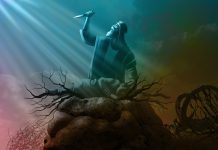