Home Hebrew Bible Joseph and the Egyptian Book of Dreams

In what scholars call the “Joseph Novella” (Genesis 37-50), Joseph is both a dreamer and an interpreter of dreams. As a result of Joseph’s dreams, conflict with his brothers brings him to Egypt. Joseph’s first dream echoes an ancient Egyptian dream, and his eventual imprisonment also finds a parallel in Egyptian dream interpretation. While Scripture includes similarities with Egyptian dreams, the Bible inverts the Egyptian Book of Dreams to highlight the wisdom of Israel’s God over that of the Egyptian interpreters.

The Egyptian Book of Dreams, which dates to around the time of Israel’s Exodus from Egypt (c. 1200’s BCE), lists various dreams and their interpretations. For instance, “If a man sees himself in a dream… threshing grain upon the threshing floor, good; [it means] the giving of life to him in his house.” In Joseph’s first dream, he and his brothers are binding sheaves of grain, “When suddenly,” Joseph recalls, “my sheaf stood up… then your sheaves gathered around and bowed low to my sheaf” (Gen 37:7). While Joseph’s dream in the grain field mirrors that of the Egyptian threshing floor, it does not end up “giving life to him in his house”; rather, it rouses the ire of his brothers, so that “they hated him even more” (37:8).

Another Egyptian interpretation asserts that a dream of someone “looking into a deep well [is] bad; [it means] he will be put in prison.” This interpretation parallels what happens to Joseph because of his dreams: “His brothers… cast him into a pit (בוֹר; bor). The pit was empty; there was no water in it (אין בוא מים; ein bo mayim)” (Gen 37:23-24). While the Hebrew בוֹר (bor) is translated “pit” in this verse, the same word also means “well” (e.g., Deut 6:11; Prov 5:15)—only this particular well had no water. In accordance with the Egyptian Dream Book, Joseph looks into a well and then ends up in an Egyptian prison!

Yet, Joseph’s story doesn’t end in prison. Instead, the God of Israel works through Joseph to interpret Pharaoh’s dreams, which leads to Joseph’s release, his rise to a position of authority, and the saving of the surrounding peoples during a famine (see Gen 41:16, 25). As Joseph says to his brothers, “You meant evil (רע; ra) against me, but God meant it for good (טוֹב; tov), to bring it about that many people should be kept alive (להחית; lehahayot)” (Gen 50:20). Joseph’s experiences mirror the Egyptian Dream Book, but God’s wisdom exceeds that of Egypt’s interpreters: although Joseph’s dream of the sheaves does not immediately result in “life for him and his family,” per the Egyptian Dream Book, the God of Israel ensures that Joseph’s dreams result in life for both his family and all the nations around Egypt! 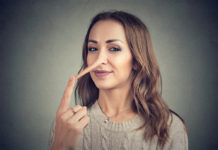 Does God Have A Long Nose?