This excerpt is from the Book of Jubilees, a second-century BCE Jewish work. Though this book was never considered canonical, some have called it “Little Genesis” because it retells many of the stories from Genesis, including interpretive commentary and additional details. The value of Jubilees is the insight into the ancient traditions the book preserves, giving us a window into certain Jewish beliefs before the New Testament was written. The following passage, which describes Noah interceding for his children, is remarkable because it contains several terms related to the unseen spiritual realm. In this single text, the author mentions demons, evil spirits, the watchers, the chief of spirits called Mastema, and Satan. How they are all related is unclear at times, but this extraordinary passage shows how ancient Jews perceived the world beyond our own earthly realm.

1 In the third week of that jubilee the polluted demons began to lead astray the children of Noah’s sons and to lead them to folly and to destroy them. 2 And the sons of Noah came to Noah, their father, and they told him about the demons who were leading astray and blinding and killing his grandchildren. 3 And he prayed before the LORD his God and he said, “God of the spirits which are in all flesh, who has acted mercifully with me and saved me and my sons from the water of the Flood and did not let me perish as you did the children of perdition, because Great was your grace upon me, and great was your mercy upon my soul. Let your grace be lifted up upon my sons, and do not let the evil spirits rule over them, lest they destroy them from the earth. But bless me and my sons. And let us grow and increase and fill the earth. 5 And you know that which your Watchers (עִירִין; irin / Greek: ἐγρήγοροι; egregoroi), the fathers of these spirits, did in my days and also these spirits who are alive. Shut them up and take them to the place of judgment. And do not let them cause corruption among the sons of your servant, O my God, because they are cruel and were created to destroy. 6 And let them not rule over the spirits of the living because you alone know their judgment, and do not let them have power over the children of the righteous henceforth and forever.”

7 And the LORD our God spoke to us so that we might bind all of them. 8 And the chief of the spirits, Mastema (מַשְׂטֵמָה, mastemah, Hebrew for “hostility” or “persecution”), came and he said, “O Lord, Creator, leave some of them before me, and let them obey my voice. And let them do everything which I tell them, because if some of them are not left for me, I will not be able to exercise the authority of my will among the children of men because they are (intended) to corrupt and lead astray before my judgment because the evil of the sons of men is great.” 9 And he said, “Let a tenth of them remain before him, but let nine parts go down into the place of judgment.”

10 And he told one of us to teach Noah all of their healing because he knew that they would not walk uprightly and would not strive righteously. 11 And we acted in accord with all of his words. All of the evil ones, who were cruel, we bound in the place of judgment, but a tenth of them we let remain so that they might be subject to Satan (שָּׂטָן, satan: Hebrew for “accuser” or “adversary” / Greek: διάβολος; diabolos) upon the earth. 12 And the healing of all their illnesses together with their seductions we told Noah so that he might heal by means of herbs of the earth. 13 And Noah wrote everything in a book just as we taught him according to every kind of healing. And the evil spirits were restrained from following the sons of Noah. 14 And he gave everything which he wrote to Shem, his oldest son, because he loved him much more than all of his sons. (Jubilees 10:1-14, c. 2nd century BCE, Charlesworth translation) 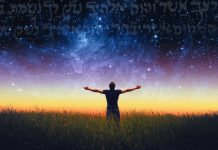 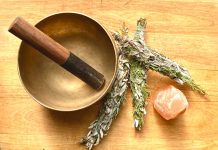 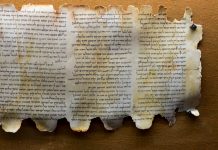 What Are the Dead Sea Scrolls?