These days, it’s not uncommon to hear a sentiment that COVID-19 is a “plague.” Now we have a mutation of the virus, even more contagious than the original, and the plague analogies continue. For many people, a plague is something associated with an outbreak of infectious disease. But what is a “plague” in the ancient Hebrew context? Biblically speaking a plague can be any affliction or suffering that comes upon humanity.

In order to understand “plagues” biblically, we have to think beyond just sickness and death. For instance, in the famous ten plagues of Egypt, God sent not just death, but also boils, hail, gnats, locusts, frogs, and darkness. Yes, hail and darkness were considered “plagues” from God, not undesirable meteorological events. The English “plague” can be a translation of not one, but multiple terms that appear in the Hebrew Bible. For example, נֶגַע (nega) is sometimes translated as “plague” but also “infection” and “affliction.” It literally means a “strike” or “blow.” The Hebraic logic is that being “wounded” or “stricken” is to be “plagued” on some level.

Another Hebrew word for “wound” or “striking” (מַכָּה; makah) is sometimes rendered as “plague” or “affliction” in English translations. Yet another common biblical term for “plague” is דֶּבֶר (dever), meaning “pestilence,” “plague,” or “death.” All of these terms were used to describe the ten afflictions God sent upon the Egyptians (see Exodus 11:1; 1 Samuel 4:8). Jeremiah refers to a punishment “by sword, starvation, and pestilence” (בַּחֶרֶב וּבָרָעָב וּבַדֶּבֶר; baherev u’vara’av u’vadever) to describe the divine chastisement of Israel (Jeremiah 14:12; 21:9). And translators of the Hebrew Bible into Greek sometimes used the word θάνατος (thanatos), meaning “death,” to express this idea of a plague.

Why does “plague” language sound so frightening and ominous to modern readers? Perhaps because a simple sickness, a disease, or even a virus can be managed in the modern world of medicines, but a biblical plague cannot be controlled. And it’s true that God is usually the source of a biblical plague, and not much can be done to stop the punishment short of divine mercy. Ancient Israelites believed that absolutely everything in this world is under the Almighty’s control: rain, sun, crops, harvest, lifespan, and even the number of hairs on your head! (see Matthew 6:27, 10:30). Why should we treat something like COVID-19, even something considered to be a plague, any different than all other afflictions? Apparently, ancient Israelites did not do that. Panic and fear typically lead us away from God. But facing any suffering or adversity with faith will always build us up.

Why Did the Lame Man Leap? 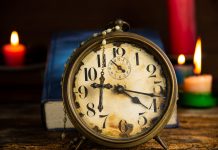 When Are Daniel’s 70 Weeks?