Home Hebrew Prayer What Does Prayer Mean in Hebrew?

In the English language, prayer is largely defined by the idea of asking. In old English one could say, either to God or to anyone else: “I pray thee to do such and such.” The basic concept here is a heart-felt request. The Jewish concept of prayer, however, is best defined by its Hebrew word “tfilah” (תפילה).

The primary meaning of the verb “lehitpalel” (להתפלל), the verb behind the noun, is self-judgement or introspection. Especially in Jewish Hassidic traditions, tfiliah is understood to be an introspection that results in bonding between the creature and the Creator, as a child would bond with his/her father.

It is not a surprise that when the Jewish Christ was asked by his disciples how they should pray, he taught them what to request, making sure to address their Heavenly King as “Our Father” (Matthew 6:9). Shortly before that Jesus warned them to avoid using vain repetitions that characterized pagan approaches to prayer (Matt 6:7).

In Isaiah, we find a curious text: “These I will bring to My holy mountain, and make them joyful in the house of my prayer” (וְשִׂמַּחְתִּים בְּבֵית תְּפִלָּתִי). Note the wording: not “my house of prayer,” but “the house of my prayer.” (Isaiah 56:7; cf. b. Barachot 7a). But how is it possible for God to engage in prayer? And with whom?

The answer lies in understanding that Hebrew prayer is not only a “request-making session.” It is a communal bonding between God and his child. The house of “his prayer” is, therefore, where God himself engages in introspection and, in so doing, bonds deeply with his people. They in turn reciprocate this action in their own prayers and bond with God. 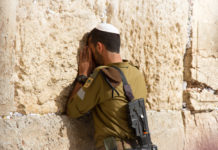