Home Hebrew Revelation Who are the Seven Spirits?

1:4 John to the seven “churches” that are in the province of Asia: Grace and peace to you from “he who is,” and who was, and who is still to come, …

The number seven in a wide variety of Jewish scriptural traditions is the number of fullness, totality and completeness. Revelation is full of sets of the number seven, but just as in the case of the churches, this fact calls attention not to the number itself, but instead to the totality of that which is discussed – in this case the Spirit (seven spirits) who is/are before the throne of God. There are at least two interpretive options here. One has to do with the Holy Spirit and the other has to do with key angelic beings.

The passage is an allusion to Ex. 3:14 according to the Greek language Septuagint version where God refers to himself as “he who is” (ὁ ὤν). The Greek is translated from the divine self-description in Hebrew אֶֽהְיֶ֖ה אֲשֶׁ֣ר אֶֽהְיֶ֑ה (I am who I am). John uses the same wording only in this place in Greek.[1] God’s unpronounceable name YHWH is believed to be connected to the verb “to be” in Hebrew. It is a composite of past, present and future aspects all present in one word, “who is and the one who was, and who will be.” The hint is deliberate.

This passage is one of many places where it could be said that the Greek used by John is poor. Note the comment above about the authorship of Revelation and possible absence of an assisting scribe on Patmos). Since not all portions of Revelation could be characterized this way, it is not possible to explain the Greek grammatical irregularities only by the Hebraic background of John’s original thought language. Whatever the explanation may be behind the awkward grammatical irregularities, they are probably intentional in nature. For the reader familiar with the nuances of both Hebrew and Greek grammar, they act as clues that something else is going on.

…and from the seven spirits who are before his throne,

The number seven in a wide variety of Jewish scriptural traditions is the number of fullness, totality and completeness. As was already mentioned, Revelation is full of sets of the number seven, but just as in the case of the churches, this fact calls attention not to the number itself, but instead to the totality of that which is discussed – in this case the Spirit (seven spirits) who is/are before the throne of God. There are at least two interpretive options here. One has to do with the Holy Spirit and the other has to do with key angelic beings.

First, conventional interpretation connects the seven spirits in Revelation with the seven “aspects” of the Spirit in Isaiah 11:2:

In reality there are six aspects, not seven, because the Spirit of the Lord is not one of the aspects. A better translation (NetBible), however, is provided by the Net Bible translators, rightly showing that each pair is really one concept, reducing 6 to 3:

No matter which translation we use for Isaiah 11:2, the connection between those verses and the seven spirits in Revelation does not seem likely to us.

Second, in the non-canonical Jewish books such as 1 Enoch that has many references to the Jewish Son of Man traditions, we repeatedly encounter an unfamiliar phrase “the Lord of the Spirits”. For example, we read in 1 Enoch 46:1-2:

There I beheld the Ancient of Days, whose head was like white wool, and with him another, whose countenance resembled that of man… Then I inquired of one of the angels, who went with me, and who showed me every secret thing, concerning this Son of man; who he was; whence he was and why he accompanied the Ancient of days. He answered and said to me, This is the Son of man, to whom righteousness belongs; with whom righteousness has dwelt; and who will reveal all the treasures of that which is concealed: for the Lord of Spirits has chosen him; and his portion has surpassed all before the Lord of spirits in everlasting uprightness.

We have here a wonderful passage establishing Jewish traditions (contemporary to the book of Revelation) about the Daniel 7 Son of Man figure. We must note that this common Enochean phrase – “the Lord of the Spirits” may be connected with the “…the seven spirits who are before his throne” in Revelation. (Rev. 1:4b)

While the parallel between “Lord of Spirits” and “seven spirits that are before his (God’s) throne” is intriguing, we may be dealing here with an early Jewish equivalent of pre-systematized, later Christian Trinity (albeit in different order) – Father, Holy Spirit and the Son.

Another interpretive possibility, however, that presents itself to us when we compare the book of the Revelation to 1 Enoch. The seven spirits before the throne of God may be seen as seven key angelic figures who (are imagined in some Jewish apocalyptic traditions) to serve before the throne of God. Angels are after all spirits that serve God and these seven angelic spirits, according to this Jewish apocalyptic tradition, serve before God. It is significant that the seven do not only appear in Enoch, but also in other Jewish books both Biblical and para-biblical.

While believers can be tempted to make too much out of this connection, we must keep things in perspective. Whether or not the names of the seven key angels are Gabriel, Michael, Raphael, Uriel, Raquel, Remiel and Saraquel as is stated in the book of Enoch, we may never know, but it is at least conceivable that other contemporary Jews (including the Jew who authored the book of Revelation) had a similar concept in mind to that of the author of the Book of Enoch (1 Enoch 20:1-8).

So, other than the Holy Spirit, another potential explanation for seven spirits could in fact be the seven angelic figures.

In this case, God, the seven key angels, and as we will shortly see, Jesus Christ, are the ultimate authors on behalf of whom John is writing/delivering this letter to be sent to the Christ-following congregations of Asia Minor.

1:5 and from Jesus Christ—the faithful witness, the firstborn from among the dead, the ruler over the kings of the earth. To the one who loves us and has set us free[2] from our sins at the cost of his own blood 1:6 and has appointed us as a kingdom, as priests serving his God and Father—to him be the glory and the power for ever and ever! Amen.

Such a full (especially in comparison to the other authors or those who commissioned the letter) title description deserves a doxological exclamation – “to him be the glory and the power for ever and ever!” (1:6b). This is especially so because Jesus Christ appointed “us” (presumably John, his community and the believers to whom he addressed his letter) to be the priestly kingdom, serving Jesus’ God (“his God”) and Father (1:6a).

The idea presented in Rev. 1:6-7 is that the multifaceted greatness of Jesus Christ eventually results in the glory and power of his God and Father. Interestingly enough, this too may have a conceptual parallel in 1 Enoch 48. We read in 1 Enoch 48:2-6:

And at that hour that Son of Man was named In the presence of the Lord of Spirits, And his name before the Head of Days…

He shall be a staff to the righteous whereon to stay themselves and not fall,
And he shall be the light of the Gentiles,
And the hope of those who are troubled of heart.

All who dwell on earth shall fall down and worship before him,
And will praise and bless and celebrate with song the Lord of Spirits.

And for this reason hath he been chosen and hidden before Him,
Before the creation of the world and for evermore.

This is indeed a very similar concept to the one described in Revelation 1:5-6

…Jesus Christ – the faithful witness, the firstborn from among the dead, the ruler over the kings of the earth. To the one who loves us and has set us free from our sins at the cost of his own blood and has appointed us as a kingdom, as priests serving his God and Father – to him be the glory and the power for ever and ever! Amen.[4]

1:7 Look! He is returning with the clouds, and every eye will see him, even those who pierced him, and all the tribes on the earth will mourn because of him. This will certainly come to pass! Amen.

What is very important to keep in mind as we slowly read the Book/Letter of Revelation is that we have a variety of voices being heard in this letter (God, John, Spirit, Jesus Christ, Bride, etc). As in any complex composition, such a rich polyphony of heavenly sound will demand careful and attentive listening in order clearly distinguish between the varieties of these voices, appreciate both their choir-like message and the voice of the individual performer.

It is not clear whose voice we are hearing in Rev. 1:7, but whoever this voice belongs to would like us to be aware that the crucified Christ will return in power (with clouds) and no one (including his killers) will be able to deny his resurrection (every eye will see him, even those who pierced him).

This will bring fulfillment to the visions of Daniel 7:14:

All peoples, nations, and language groups were serving him. His authority is eternal and will not pass away. His kingdom will not be destroyed” as well as Zachariah 12:10: “I will pour out on the kingship/house of David and the population of Jerusalem a spirit of grace and supplication so that they will look to me, the one they have pierced. They will lament for him as one laments for an only son, and there will be a bitter cry for him like the bitter cry for a firstborn.

[2] Most Bibles have “washed” (λούσαντι, lousanti) instead of freed (λύσαντι, lusanti), but most reliable manuscripts have set free. There is a one-letter difference between the two, but the “set free” is likely to be the original variant.

[3] Firstborn (bikkurim) from the dead is a uniquely Jewish title, tied to the concepts of the first fruits of the barley harvest offered on the third day of Passover. The motif of resurrection is implicit in this feast and this title is used by Paul in 1 Cor. 15:20 and Col. 1:18.

[4] John, to the seven churches which are in Asia: Grace to you and peace from Him who is and who was and who is to come, and from the seven Spirits who are before His throne. (Revelation 1:4)

And to the angel of the church in Sardis write, “These things says He who has the seven Spirits of God and the seven stars: ‘I know your works, that you have a name that you are alive, but you are dead.’” (Revelation 3:1)

And from the throne proceeded lightnings, thunderings, and voices. And there were seven lamps of fire burning before the throne, which are the seven Spirits of God. Revelation 4:5

And I looked, and behold, in the midst of the throne and of the four living creatures, and in the midst of the elders, stood a Lamb as though it had been slain, having seven horns and seven eyes, which are the seven Spirits of God sent out into all the earth. (Revelation 5:6). And I saw the seven angels who stand before God, and to them were given seven trumpets. (Revelation 8:2) 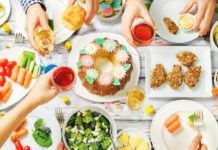 To Eat or Not To Eat? 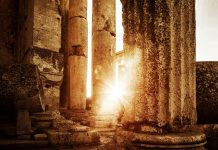